How to play Artifact with some tips and tricks

So Artifact officially has come out of beta and have left many players scratching their heads when trying to figure out how to play. So this is a small introduction on how to play Artifact with a few small tips I've found in my time playing.

The entry cost for the game is 20 dollars to get access to the base game. With this price you'll get ten card packs, five event tickets, and two starter decks. After that you’ll need to buy the card pack for 1,99 each and they contain twelve random cards each with a guarantee hero, two item cards and one guaranteed rare card.

Though it is possible to win car packs by winning three matches before losing two in any of the competitive matches these are located under the expert tab. These tickets can only be bought so if you lose five times you not be able to win any more card pack resulting in the player either buying more tickets or packs them selves. 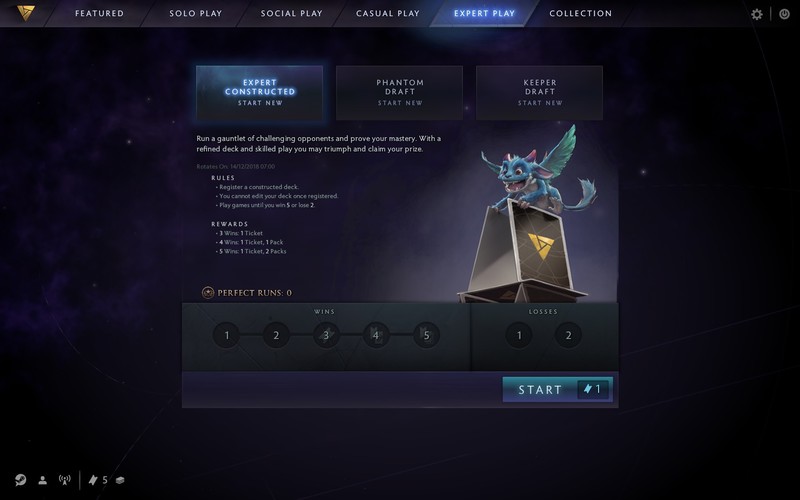 So how do you play Artifact?
⦁    Basically there are three “lanes” where you contest your opponent to who first can destroy the others tower. The towers start with 40 health points and have two stages the first is when it’s whole, the other is after it breaks. After it breaks your “Ancient” gets released and become susceptible to damage. The Ancient have 80 hp and can be killed resulting in the loss of the owner, you could also win by killing two towers in their first stage and that’s what you’ll do most of the time. Each unit has attack- and hp values as well as an armor value which are shown on their cards. 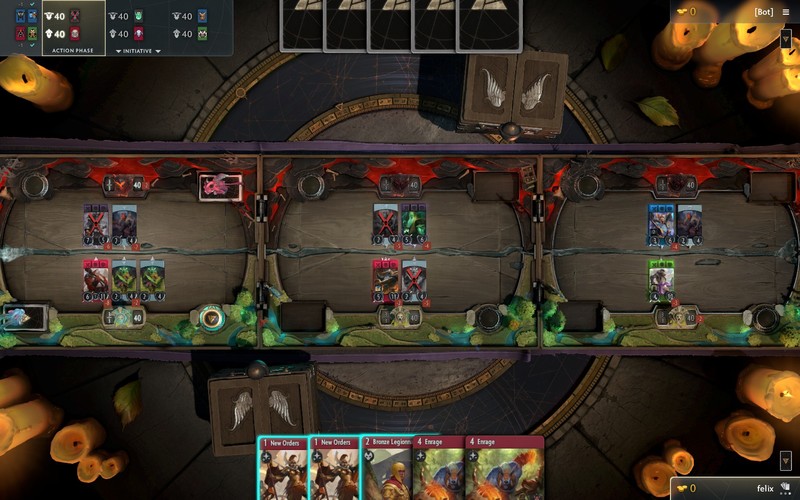 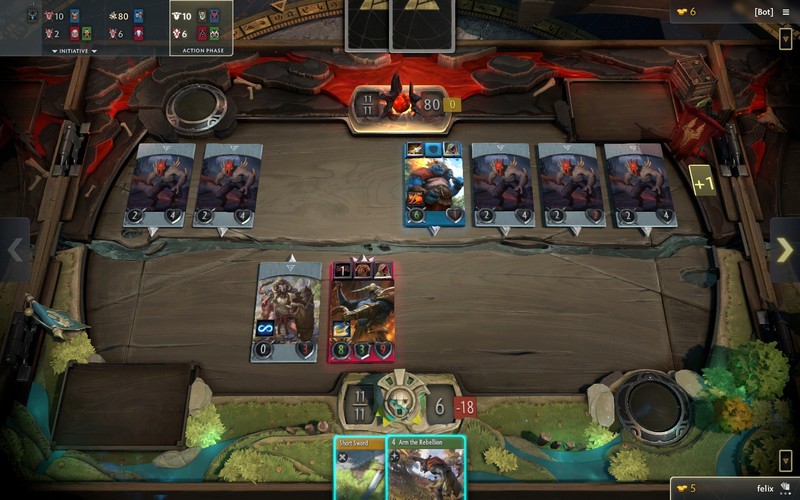 ⦁    So how do we destroy the towers? We do that by first starting the match, when we start the match both players gets one hero per lane and four “creeps” across the three lanes. Creeps are smaller minions that can't be equipped with items or be used to cast spells. Creeps and heros can also have abilities that change how they work or allows it to make special actions. The placement of the creeps and heroes are randomized except that you can choose in what lane the heroes are placed in and if we create a creep by using a spell then we can also choose where it’s placed in that lane. If the creps and heroes don't have any opposing cards then their spots are replaced by a arrow that dictates which way their attack are directed this can however be changed with spells. If your heros gets killed they return to the “Fountain” and can get placed the next round.

⦁    The player starts with 5 spells, these card can be used to damage towers or units, create creeps, move units, change targets, modify stats on cards and more. The player can only use spells if they have a hero of the same color as the spell in that lane and enough mana. The player get mana every round starting from three, after every new round the mana cap increases by one which allows the use of higher costing cards.

⦁    Lastly there's item cards which you can buy from the shop. The shop becomes available after every round meaning you've gone through all three lanes. These cards can buff your heros in different ways from armor buffs, healing, armor, abilities and more. These cards are bought with gold that you get by destroying enemy heroes and creeps. 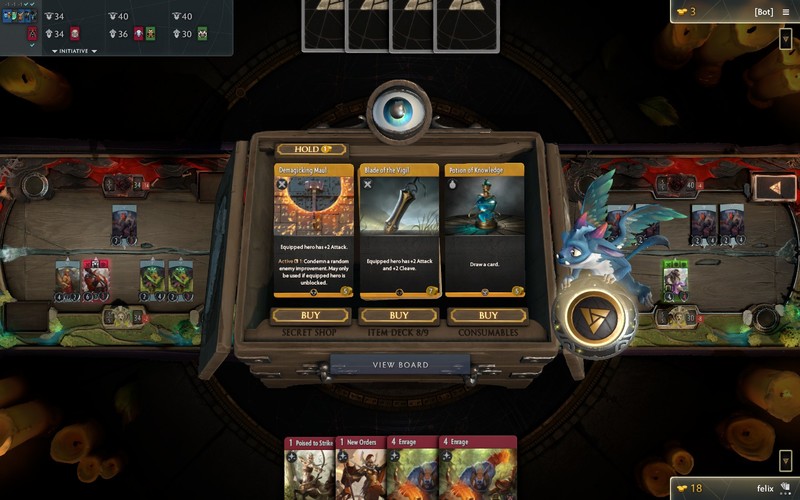 Tips when playing
⦁    There are a few rules when creating a deck. First you need at least 40 spells, 5 heroes and 9 items.

⦁    Try to find a direction to move in while creating your deck. For instance if you wanted a creep based deck then you'd normally use the green or red type.

⦁    First and foremost know your deck. What i mean by that is to know what kind of victory condition you aim for and what your weakness is for a example. A creep deck where you stretch your deck further than your opponent can defend or a spell deck where your heroes are weak but you make it up by using your spells. By victory condition it can be using the red deck and destroying two towers or just focusing on one and destroying the Ancient.

⦁    Second, don’t spend gold unless you want the upgrade. Well let's set up a scenario where you've spent all of your gold every turn but your opponent bought a equipment card that have the ability to destroy enemy upgrades and turn the table on you or get a card to change where the hero’s placed destroying your hero instead of you destroying a creep.

⦁    Third try to get a sense of your opponents deck. If the opponent is using a green creep buff deck don’t let them get a large amount of creeps. If they are using blue then destroy their heros hampering them from using spells etc.

⦁    Fourth try saving you modifier spells for heroes because they will stay modified even after they “respawn”, this also works for enemy heros so if you have a negative armor or negative attack then try to save them for the heros.

⦁    Fifth this one isn’t so important it’s just that in my experience the rapid deployment ability is amazing because it allows the hero to be set the turn after it’s destroyed resulting in it being pretty much constantly on the board. It’s also somewhat relevant because one of the green starting heros have that ability.